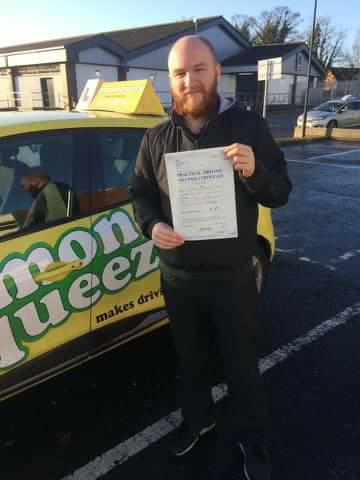 Working with me is hard. Super hard. There’s a long line of people who will tell you the same. Despite the hard journey people walk with me, if things go wrong, someone has a shit day, maybe something in the programme needs tweaking or someone simply doesn’t understand something… I’m there to deal with it. For those that come for a workshop, they are already at a big disadvantage as they only see me for 3 hours! Although I’m only at the end of the phone, and they have my services until they don’t need me… It’s on them to keep moving forward. To get out of bed every morning and do the things you must do, but not necessarily want to do it, is HARD.  So, for Jonny to achieve what he did, by himself, is an absolute testament that if you want it, you get up everyday and you work for it.

I first met Jonny on the 7th of October last year at the Edinburgh workshop.

Jonny initially experienced pain in his wrists in July 2012, first starting in his right arm, spreading to his left. Jonny was working a retail job which required a lot of use of his hands, as well as studying computing and gaming. Over the years he started to experience other symptoms; first during a run when he felt pain in his calves and heels. When he walked he would have pain in his heels, unless he had gel insoles in his shoes.  Jonny’s back pain started in 2014 and was intermittent. When he used a computer for extended periods or pushed himself with anything physical, his back would begin to burn, his shoulders and neck hurt and went tight, as well as his scalp and the sides of his chest and would stay like that for a few days; longer if he didn’t rest. Nerve condition studies came back with nothing wrong, and MRI of his wrists showed no damage. Jonny’s doctors diagnosed Fibromyalgia.

Fast forward to January 2018 and Jonny is very different! He is having pain free days, kicked the chronic fatigue, is exercising regularly, doing social things again and my favorite.. He went out and passed his driving test 🙂

“Life is so different now in many different ways, physically & mentally. Before I began I’d hoped like I did every time I saw someone new or tried something else, but after years of nothing working, I didn’t expect this to be any different. When I met Adam and he didn’t immediately diagnose me with something else or ignore what I had to say & instead talked to me about myself, my past, himself and others he’s helped. I felt this was different. He explained the ‘why’ so I understood, instead of just having a name to my condition. I began to learn the why there was pain and how to overcome it. It wasn’t easy, far from it! Some days I would wake up and the last thing I wanted to do was have a cold shower & exercise but I’d knuckle down get through it and feel better for it. I’ve had many pitfalls during my journey but Adam never put me down for them. Instead, he’d give me the kick up the ass I needed to try the week again, and succeed! I feel now even when I fail I can talk to him and not feel like I’ll be pushed aside because I wasn’t successful every time I try. My mindset now is a complete 180 to what it was. I’m now planning for goals I want to achieve that I would never have imagined & when I have an off week instead of beating myself up and feeling like a failure, I move on to the next week determined to do better. I’ve started my new year with the flu and been unable to do anything and all I can think about is when I can next exercise and have a cold shower! Adam has taught me so much but the thing that sticks with me the most is “motivation can disappear, but determination will keep you going.”

As I’ve said a million times, workshops are the bane of my life. It kills me inside, being able to see how well someone could do and they give up and fall off the face of the earth. Like I said at the beginning, it’s hard enough when I’m there in person, so to do it yourself, to push through all the shit days, to stay consistent, to follow everything exactly as its laid out and to push the self-discipline when the motivation goes…. Now that’s impressive.

Now that Jonny is driving, he is going to come down to Newcastle to have a catch-up and a session. It will be nice to see the new Jonny, or technically the old Jonny, that I didn’t meet in Edinburgh.

Well done buddy, no one can say you didn’t earn it, you definitely put the work in 🙂