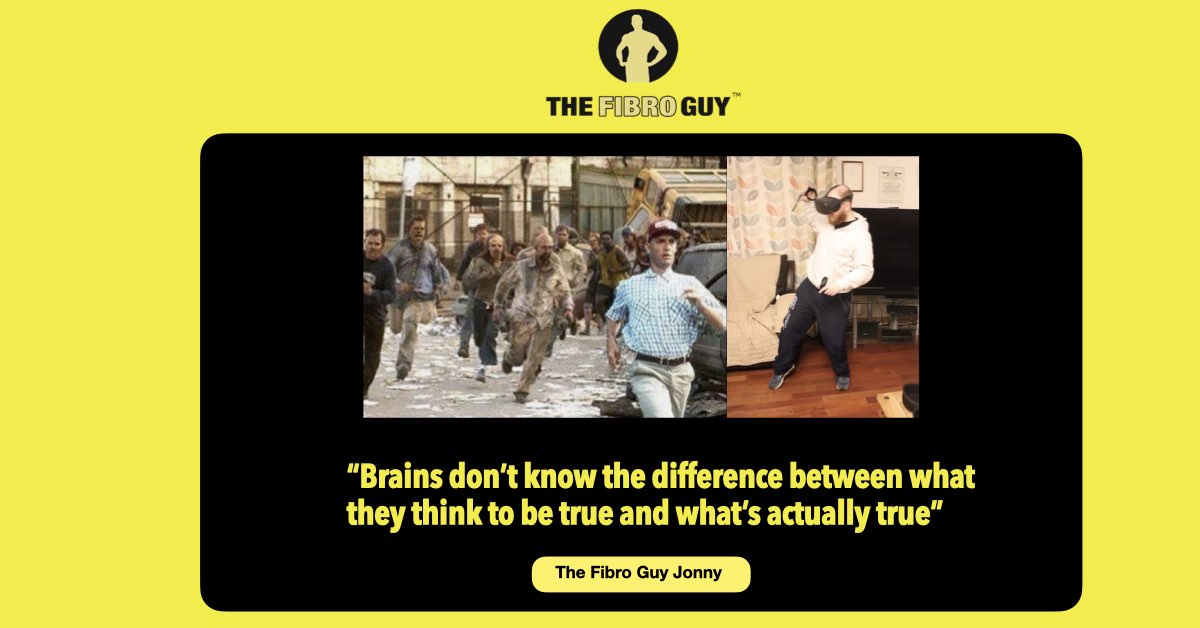 Author Adam Foster Categories Pain Management 0 comment
The truth is that the environment you live in and indeed perceive has as much to do with you being in pain (and getting out of it) as all of the other biological reasons.
Brains don’t know the difference between what they think to be true and what’s actually true. In fact, it’s one of the best things about being a human, and also probably one of the worst.
In the picture above I’m playing virtual reality (VR), and we often used VR in the studios to help with client recoveries for a tonne of different reasons.
In the picture above, I know I’m nice and safe in the studio. I know there are no threats around me, and I know that I’ve played this particular level on this game a thousand different times.
Despite this, my brain thinks I have a large group of zombies chasing me, and as such, I’ve released an enormous amount of adrenaline, my heart rate has risen and it messed up all my complex motor skills(this happens when your heart rate goes up) leading me to run around the studio like some kind of lunatic!
My brain makes me feel, experience, and produce, the expected chemicals that it thinks I should be feeling, given all the threats from the undead hoard around me. The only problem though is that the undead hoards chomping at my feet, well, they don’t actually exist.
So, you may know pain doesn’t mean damage, but that doesn’t mean your brain thinks that.
You may think pain does mean damage, and perhaps your brain thinks it too.
I know zombies are not real, but it doesn’t stop my brain from thinking they are.
People hinge far too much of their recovery on their own consciousness, but the truth is you don’t have any real direct control over whether you produce pain or not.
You didn’t choose to be in pain. You had no real choice in it. You ended up in pain because of a complicated set of variables all working together, and to get out of it, well, it takes the same; a lot of variables working together in your favour.
Otherwise, you would be able to just do what Betty down the street did to get out of pain.
One of the first things I learned during my own recovery, long before I was a Fibro Guy, was that leaving out the social factors when it comes to chronic pain, really stalls your recovery.
That’s the truth of it, but so many people miss them out. It’s understandable though, as at first glance they don’t really seem all that important, but they are. Recovery isn’t just about your biology or your psychology, if it was then you could just simply exercise and CBT your way to a clean bill of health. Nope, there’s a huge social component to it and honestly, it’s more important than most people even really realise.
One of the craziest things is that when people are online looking for Fibromyalgia recoveries or new fibromyalgia treatments, absolutely nobody looks at the social factors!
The environment you live in, be that the objective environment or subjective mediates and changes every single biological and psychological driver for your pain.
There are reasons why those who have suffered at the hands of domestic abuse have a much higher prevalence of developing chronic pain.
There are reasons why smokers are more likely to suffer from head pain.
And there are a million other reasons why people end up in pain full stop, and not all of them are to do with how your joints work your posture or any of the other endless sole reasons that people give.
Your environment, your job, your family, friends, and support network, they all fit into your social bubble and they can help or hinder your recovery.
Likewise how you perceive any of these factors can also change how they can affect you and your conditions such as Fibromyalgia.
Pain is a brain thing, and as such, there is a tonne of different variables involved, because brains take them all into account.
Unfortunately, people don’t realise this and they eventually become frustrated that nothing has worked for them, even though they have put 100% into their recovery.
We see this a lot with people when they first come to us. They gave it 100% but everything they have tried so far just didn’t work. But, this is a new year, a fresh start, and it’s a fresh chance to really learn, get a handle on, and overcome everything that’s been holding you back, even though you have been going at it with 100%. But, not really moving forward.
And for a lot of people, a full recovery from fibromyalgia can seem a lifetime away if not impossible.
And that starts with the right knowledge.
So, if you want something different this year, you’ve got to change your approach, or the start to 2023 will be exactly the same as this year.
I know Adam is working on some great video content to cover the roadblocks of recovery and how to get around them.
While he is working on them, I want to start you on your journey by giving you one of our resources covering some of the variables that keep you in pain and why despite you putting in the effort, you’re still at a standstill.
So, if you are interested, just shoot us an email and we can send it over to you.
–
The Fibro Guy Jonny
Share Post
Previous
Next