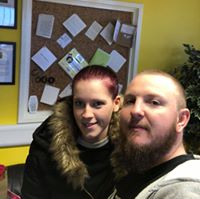 Zoe has Hypermobile Ehlers-Danlos syndrome and when she first turned up at the studio she was having a lot of trouble even being able to walk due to the pain.

*Zoe- I can barely walk most days because of the pains in my legs. I’ve popped my knee out of place a couple of times too. Also, I often feel like my elbows lock and have to move them a certain way to get it to stop! The pain varies on a daily basis. Most days I’m in pain but try to push through it and try not to take painkillers. Other days, I’m almost crying from the pain and have no other choice but to take something to try and ease it! And some days (very rarely) I don’t get much pain at all! Its stopped me doing daily activities that a 24 year old should be able to Do and it’s so frustrating! I can’t walk my dog, push a pram, pick up my 1 year old nephew and even if I laugh, it causes pain and I pull something in my back! *

Over zoes time with myself,  she has really applied her self, done everything I have asked and has really started to turn her life around  The first video is of Zoe trying to stand up, but unable due to pain. The second is what Zoe now does without any pain at all!

*zoe-So far I’m finding working with you to be more beneficial than I initially thought. I was sceptical (and also quite scared) that it wouldn’t work or it would make the pain worse. I soon found after the first few sessions that wasnt going to be the case. The first few sessions were hard and the pain for a few days after a session was tough but manageable! It wasn’t anything like the previous pain I experienced, more muscular which soon subsided. The improvement has been immense so far and I’m now able to do things I’ve not been able to do for a long time! Not only has it helped with the pain, it’s helped me more mentally than I ever thought! Letting off steam and just generally being around you, has helped me so much!