“As a child and a teenager I was quite active but when I started university I picked up smoking and quit doing Sports. Since then I felt weaker but I always put the blame on smoking. At the age of 23 I injured my back and it affected my life very seriously. I couldn’t carry anything, lift anything and I had to get used to it. My back was so painful that I had to stay in bed and rest for days at a time. In time I learnt to live with the limitations and stopped forcing myself, but my back didn’t stop hurting. 5 years later I had neck pains and shoulder pains which limited me even more. I went to Dr and I was diagnosed with a herniated disk in my neck,and shoulder impingement. The very same year I also developed problems with my feet, and no matter what shoes I wore they would still hurt. I couldn’t stand and I couldn’t walk it was literally killing me and again, and again I saw more doctors. They told me that I had bunions and I should only wear flat shoes.
Then last but not least, I developed problems walking up the stairs and opening doors. I was felt like a 90 year old lady in agony who needed a wheelchair. sometimes I envied 70 year old people since they were stronger than me.

I had limitations for years And i didn’t carry anything I didn’t force myself to do anything, i couldn’t push myself, I was in what Adam calls “mega protection mode” protecting myself. Some time on I ended up with two knees with meniscus tears. The doctor told me that I needed to have a surgery and he asked me if I was doing extreme sports because it was very rare that a person can injure both of the knees at the same time. I told her that I was not doing anything physical at all let, alone doing Sports……and this is how I learnt I had hypermobility syndrome and fibromyalgia. The doctor said there is no cure surgery or pills for these.

After putting so much stress on myself, my knees and my shoulders got even worse. I was bed bound for a couple of weeks meanwhile I started to search online about fibro and hyper mobility. I felt so helpless and frustrated I decided to add people like me on Instagram (lovely lady named Katherina ) and I found Adam by chance. I wanted to see him I knew something was genuine about him but I had to gain some strength because I was so weak I couldn’t take a flight from turkey to the U.K. And I couldn’t even walk I was because I was in constant pain . A personal trainer from United States Shannon (to whom I am grateful )who also has hypermobility syndrome and fibromyalgia help me to gain some strength by exercises,and when I felt bit stronger I came to Newcastle and met Adam.
When i talked about my problems he listened and I asked what was I expecting and I said I don’t expect much if only I do daily tasks is enough for me. At the time I was not dreaming to do extreme sports or anything, just to get some normality back. Adam looked me in the eye and said “You will be able to do everything and anything you want to” and I trusted him.
Adam told me to stay 8 weeks but I wanted to do more, so I stayed 10 weeks.

Within the first week I was able to open the heavy fire doors of the building, something I hadn’t been able to do for several years! I was also getting up and down from the floor, something that was always painful and near impossible. I had always felt mentally limited, I didn’t believe I could do anything and that things would always be the same.

A Few short weeks later, Adam took the lovely Jess (his trainee) and myself ice skating I was in a shock and frightened stiff, but I did it! Rather easily! Everything is beyond my wildest dreams and expectation, I have lifted my body weight, ran up steps, started cooking again and I now know that pain doesn’t always mean damage. I still have a little way to go, so I’m not going to say I have my old life back just yet, but I’m on my way, and I will get there! I am a million times better than when I first turned up in the U.K. from turkey, I now have my independence back, I am capable and now I’m looking to get back to work.

This has not been easy, but Adam’s weird British humour and his cracking dialogue with Jess made it so much fun! I still don’t know and can’t believe how I found him, perhaps fate or a miracle! I believe I owe the rest of my life to Adam. The past few weeks has been a combination of gratitude, friendship and hatred at times, but I will never leave you alone Adam! 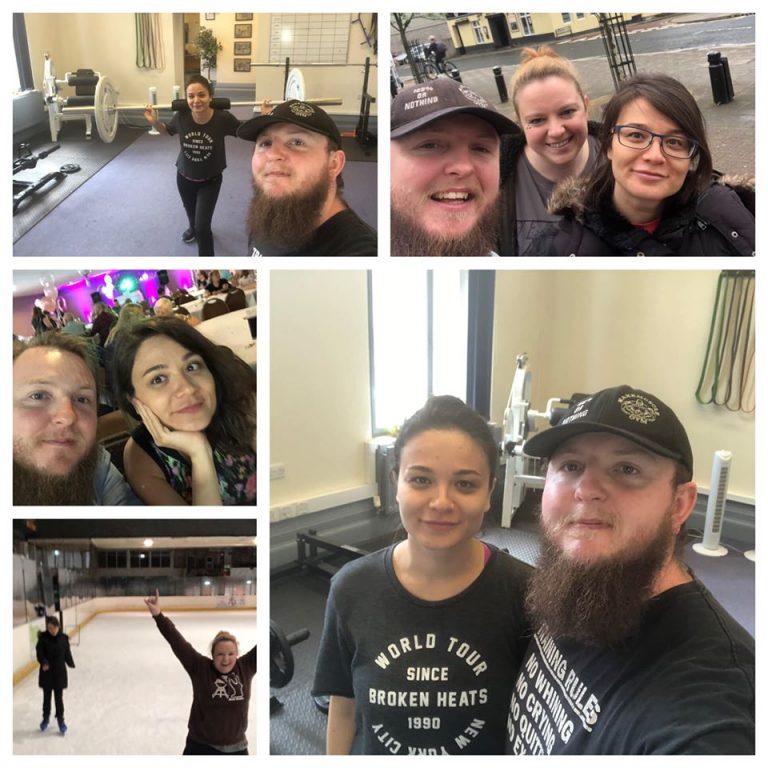