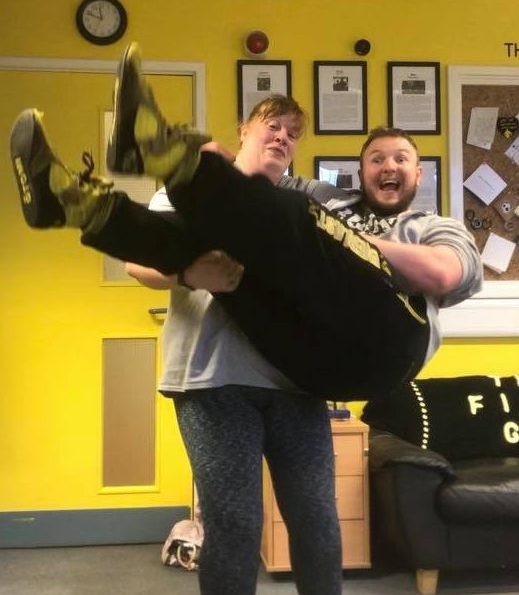 “I first met Adam 10 weeks ago, after deciding I was going to be 50 soon and was sick of feeling old and decrepit. I have always been hypermobile and quite strong too, but after a few major surgeries and another traumatic event, was diagnosed with fibromyalgia. Like many people I was told, to do this but then not to do that, my core was weak as I had been cut through my stomach, blah blah blah…

Eventually, I was told by a senior specialist physio I would have an uphill battle for life, as I needed to decrease mobility for the hypermobility, yet increase it for the fibro……. Yeah right…so how do I do that; ‘well possibly walking in a swimming pool?’

So after a few months of whining and feeling sorry for myself (very unlike me) I decided to research. Before I even started I spotted a Facebook page with Adam on, and just thought I have nothing to lose….
So initial meeting….mmmh went away and thought some fairly negative and possibly unkind things, (Yes I have apologised to Adam now!)
But come on a week of cold showers and the dreaded foundation exercises……what on earth is the point of that? How the heck is that going to change me?
However, my 8 weeks are now finished on a one to one basis, and can I tell a difference? Oh yes I can. Week two I lifted Geoffrey, didn’t even blink, because I believed I could. (He is a 120kg tyre, just in case you’re wondering) I can honestly say, hand on heart, how hard but how rewarding it has been. I feel encouraged, challenged and spurred on by Adam, who God help him gets an ear bashing, thumped in the leg and swore at twice a week, but the fun side, the encouragement and the belief he has in me keeps me going. I don’t feel 50 in my head, so having a body that feels the same can only be a bonus”