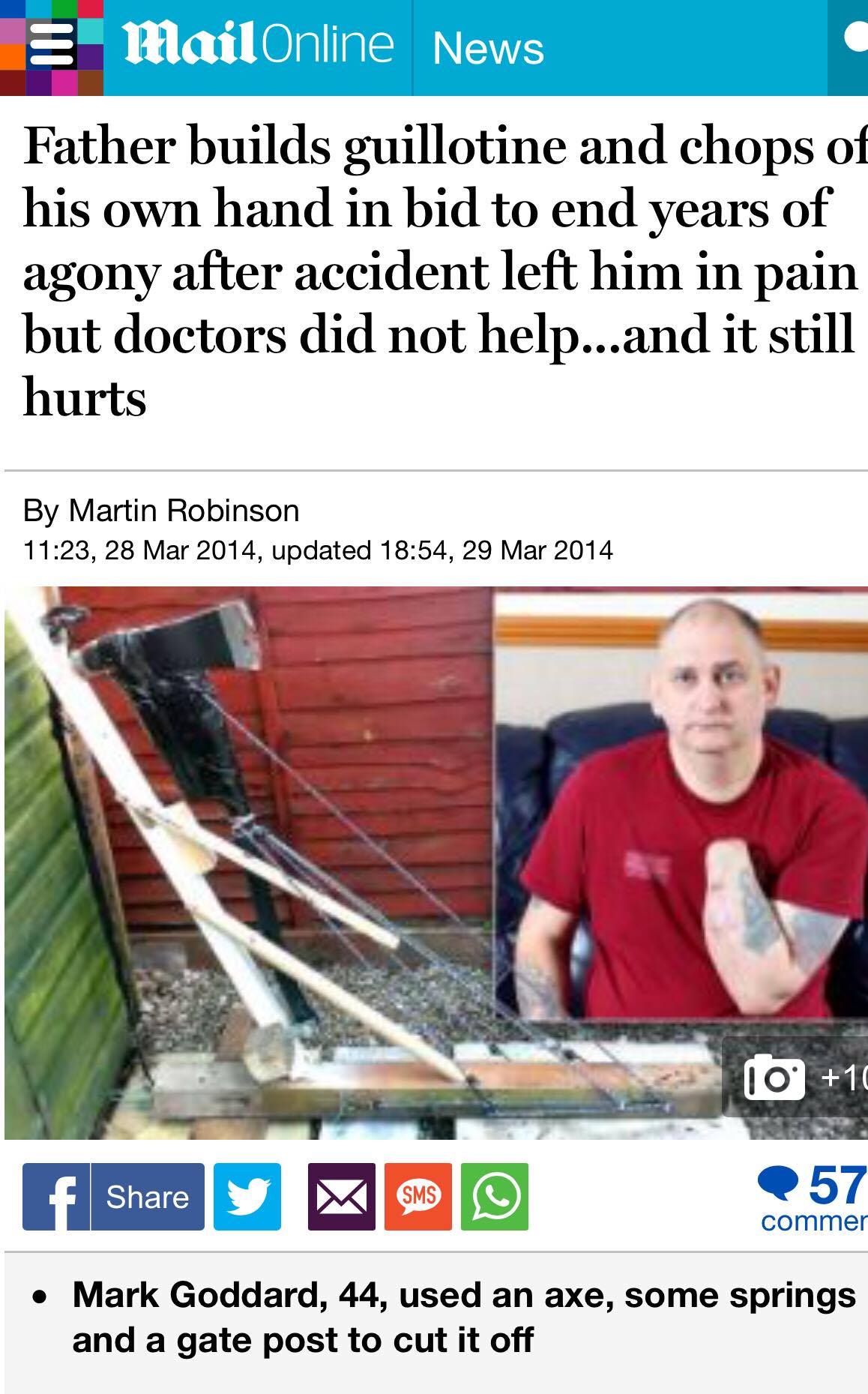 Following on from the “Pain is for protection, not damage” blog, I found some brilliant examples to help show you how pain can exist with or without damage. Pain is an output of the brain when you subconsciously deem that pain is an adequate response to the inputs you receive. Remember though, that what we believe, past experiences, how you feel that day, who you are with, why you are doing what you are doing and how you are doing it, can all change how you process the various inputs of the world and ultimately, cause things that you used to do, to now become painful…..

“Pain: An unpleasant output of sensation created in the brain, due to a sensory, emotional and contextual stimulus designed to protect the body from actual/potential tissue damage and danger.”

Pain is incredibly complex and we will never truly understand it in its entirety until we can fully explain consciousness. It is because of this, that I believe we have such a hard time trying to define it, let alone explain it. In my opinion, even the current definition is a little sketchy and trivialises its complexity. Everybody you meet, from doctors to your massage therapist will all have different definitions of pain. If you are reading this, then you have more than likely been in pain for some time! So, it’s important to understand that anything we do we will get better at. If you practice the guitar every day, you will become a good guitar player, if you drive every day, you will become a better driver and if you are in pain a lot, then you will get better at creating it! This ability to adapt has served us well for millions of years. However, it can also work against us…. Take, for example, chronic pain. When it comes to pain it’s important to remember that a sizable percentage is based on perception. Pain is quite simply there to alert us to potential damage/danger. Your body has one job to do; keep you alive to pass on your genetic information. Your body does not care if you have an important engagement to attend, if you have work to go to or that the weather is nice and the kids want to go to the beach! It is there to simply protect you and if creating massive amounts of pain will protect you from damage or danger, then, by all means, that is what it will do.

Pain is a very real feeling, it destroys lives, it doesn’t discriminate and it changes how you interact with the world around you. Pain is individual to every single person reading this, but it’s also very misunderstood! You may feel at the moment that it’s “You vs Pain” battling every day with this omnipotent foe. But, pain and yourself, are actually on the same side. Once you understand how pain works, why its made and when its made, it no longer seems like the enemy, in fact, its actually a pretty intelligent alarm system designed to keep you safe.

Did you know that there a few people around the world who don’t even feel pain! This is known as “congenita l analgesia” and these guys and girls don’t tend to live very long. How would you know if your appendix was about to burst if you couldn’t feel pain? Or how would you know

if you were walking on a fractured leg?  Well, the truth is you wouldn’t and this doesn’t bode well for humans. There’s a reason we experience pain and its not about damage, it’s about protection.

Did you know that you don’t even need a body to feel pain? It sounds crazy, but its true! There was a man named Mark who fell off his motorbike in the late 90s and began to suffer intense pain in his hand as a result. Mark had x-rays, MRI’s and nerve conduction tests performed and every time, they came back fine. After a while, Mark asked the NHS to amputate his hand, he felt that he would rather not have the hand if it meant no more pain. After a long drawn out argument with the NHS about the ethics (because he was asking them to amputate a hand with perfectly healthy tissue), they said no. Mark had reached the end of his tether and decided that he would take matters into his own hands. Over the next two weeks, he built a guillotine in his shed. Mark waited until his wife went out and he chopped his own hand off! He threw his hand into a bucket and set it on fire so that it could never be reattached. 3-6 months is considered the average healing time for most tissue and when Mark had healed, unfortunately, he still had hand pain…..despite not having a hand. I’ve had clients over the years complain that inside of their knee was hurting, despite the fact they had a full knee replacement years ago!  They were feeling pain in a piece of metal! I’ve had people with horrific tissue damage in agonizing pain walk through the door, but I’ve also met people with no tissue damage, in just as much pain. I’ve seen people in pain with the worst posture imaginable, heads so far in front of their bodies it was just crazy. Sometimes, correcting this helped some people and in others, it didn’t make the slightest difference! I’ve even had these people come in and when I’ve asked about their neck, they have had no pain there whatsoever and had come in regarding something entirely different! There’s actually more of a possible causation relationship between people hating their jobs and lower back pain, than posture causing pain. Posture is more emotionally driven, more of an effect rather than a cause. If you feel depressed what does your posture look like? What about if you feel happy? Totally different, right?

Pain is complex, it needs emotion, beliefs, context and so much more to exist. Mark is the perfect example that pain isn’t about damage, as he had healthy tissue but also had pain.  You can read Marks press article here. So, if somebody can have no damage and still have pain, can somebody have damage and experience no pain? In short, absolutely!

Take for example Federico who was involved in a shark attack. Fed was out surfing one day when he was attacked and sustained a bite to the arm. After being rescued and pulled to shore, he realised he had also been bitten on the leg and he had never even felt it. You can read about Fed here.  Then there’s the Russian woman who was walking home one day from work and encountered a mugger. She was unknowingly stabbed in the neck, but took over an hour to realise that the knife was still in there! You can read her story here.

I literally spend my days with all kinds of people, showing them that the body is merely a shell and that the nervous system and brain is King. If you get stuck in the mindset of Pain=Damage or Damage=Pain, then you will not get very far into a recovery. There is so much new and old information out there to be digested and to be used, you just have to look for it.  You have just read this blog, so I’m guessing you are reasonably good at reading and writing?  Imagine, however, you only knew 11/26 letters of the alphabet, do you think you would be as good at reading and writing? The answer is no. With pieces of the puzzle missing, it becomes a very hard task.

Pain is the same, if you lack the knowledge or you have pieces missing, it will seem impossible to get out of pain….Knowledge is key!